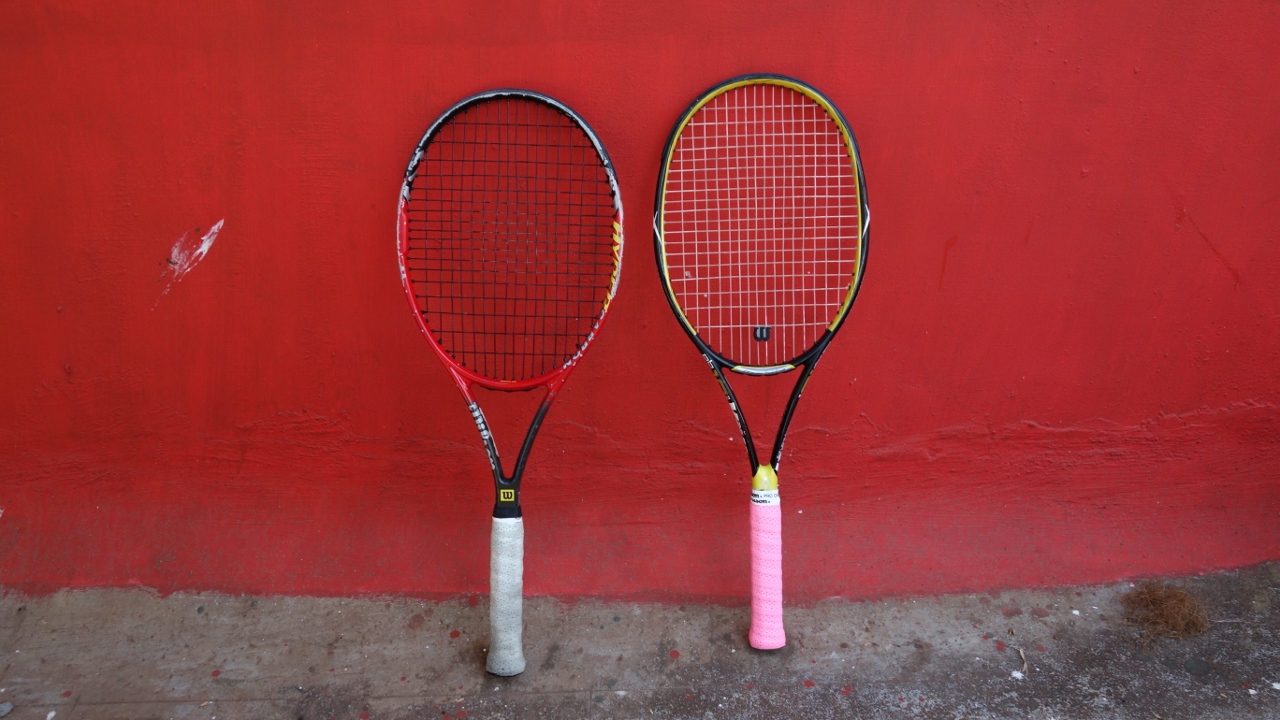 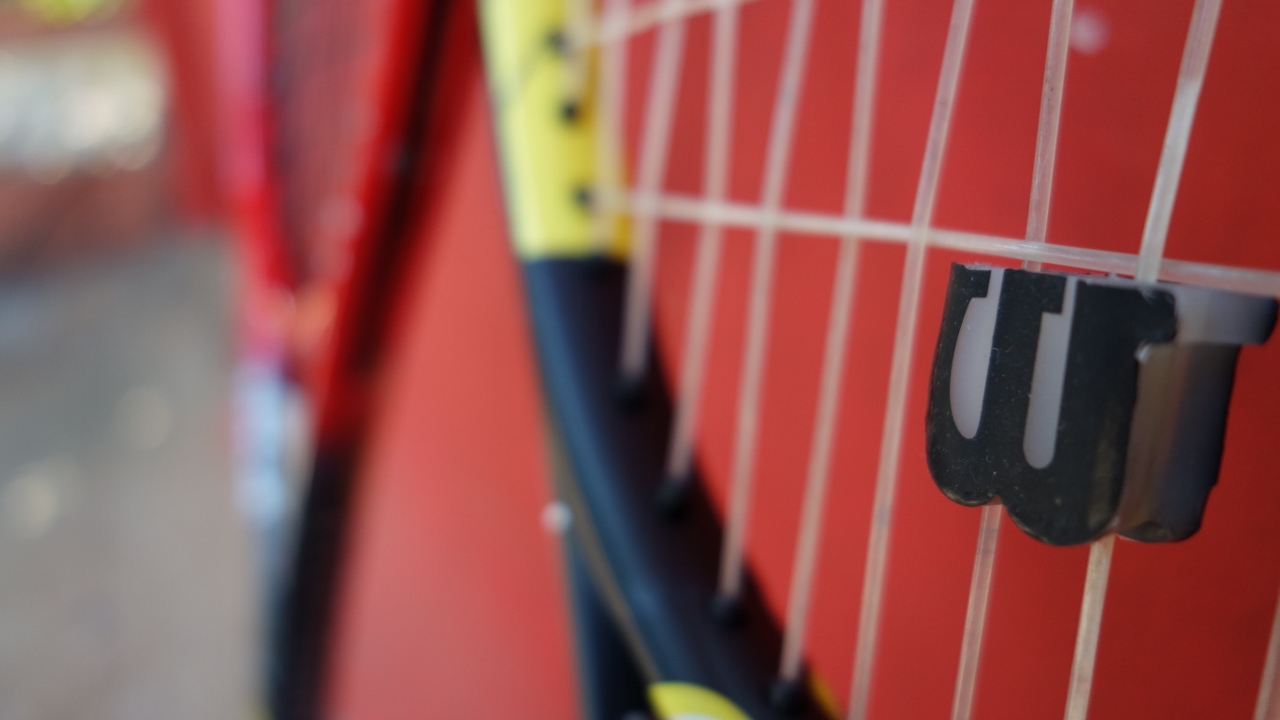 A few folks have written in asking for more info on the tennis side of things[1], so I figured I’d go ahead and oblige. The following will be a write-up on our tennis gear and general philosophy on fitness, and honestly I reckon it’ll be pretty heavy on the gear side. Be advised.

The obvious place to begin, then, is with our rackets. They’re with us everywhere we go, and given how light we’re both packing, they actually take up an absurd amount of space. (To illustrate the point, my full pack will fit plenty of lockers that the tennis racket won’t.[2])

The make and model of any player’s racket is very personal choice. Vince uses a racket that he literally dug out of the garbage when he was sixteen years old, and he beats me with it nearly every time we play. I can’t tell you which racket to use. I can, however, tell you which is the best racket currently in existence, and then make fun of you for using anything else.

I play with the Volkl PowerBridge 10 Mid. I don’t know how far into perpetuity people will be reading this—perhaps hundreds of years?—so I’ll lend a quick point of reference for my choice: The year is 2013, and the past decade has marked a sickening trend toward lighter and lighter frames among casual players[3]. There are tennis rackets currently on shelves with sub-9oz frame specs. I write to you, future tennis players of a hopefully more-enlightened era, from very dark times.

By today’s standards, the PB10 Mid is a club. The strung spec is 11.6oz and 10 pts head-light. This means that it clocks in at over 12oz strung. In my personal opinion, 11oz strung is the absolute minimum that any man should be playing with. For women, I’d drop that to 10.5 or so. The reasons are many and most of you have likely started skimming out of boredom anyway. But suffice to say a heavier racket is better for your game, and better for you (tennis elbow, etc.). There’s a lot of misinformation in this area.

Another spec in which the PB10 Mid is sort of remarkable is its head size. At only 93 sq. in., it’s among the smallest-headed rackets still in production. Once again, there’s a whole sad history here—the ‘Mid’ part of the name is actually a total throwback; low-90s sq. in. used to be middle-range when it came to head size. Alas, the only really popular racket still in production with a smaller head is Federer’s signature frame, the venerable Wilson 6.1 Tour (at 90 sq. in.). And Wilson has already begun to chip at the amazing reputation of this stick by building larger-headed versions (aimed at beginners), and actually putting the words ‘Pro Staff ‘on the paint. A total bastardization of a legendary lineage. The only reason people are still buying the 6.1 Tour (even though the 90 and 95 sq. in versions are really amazing rackets) is Federer himself. Everyone wants to play like that guy. I wouldn’t be surprised if the 90 was discontinued after Fed retires.

So, getting back to a subject that any single person reading this might care about, the rackets aren’t too hard to carry around. And, like most of our respective packing lists, they’re actually only with us when we’re moving cities or to different accommodation (or if we’re playing tennis). Otherwise, they’re left in the rooms with spare clothes, sleeping bags, toiletries, and anything else we won’t need for the day. 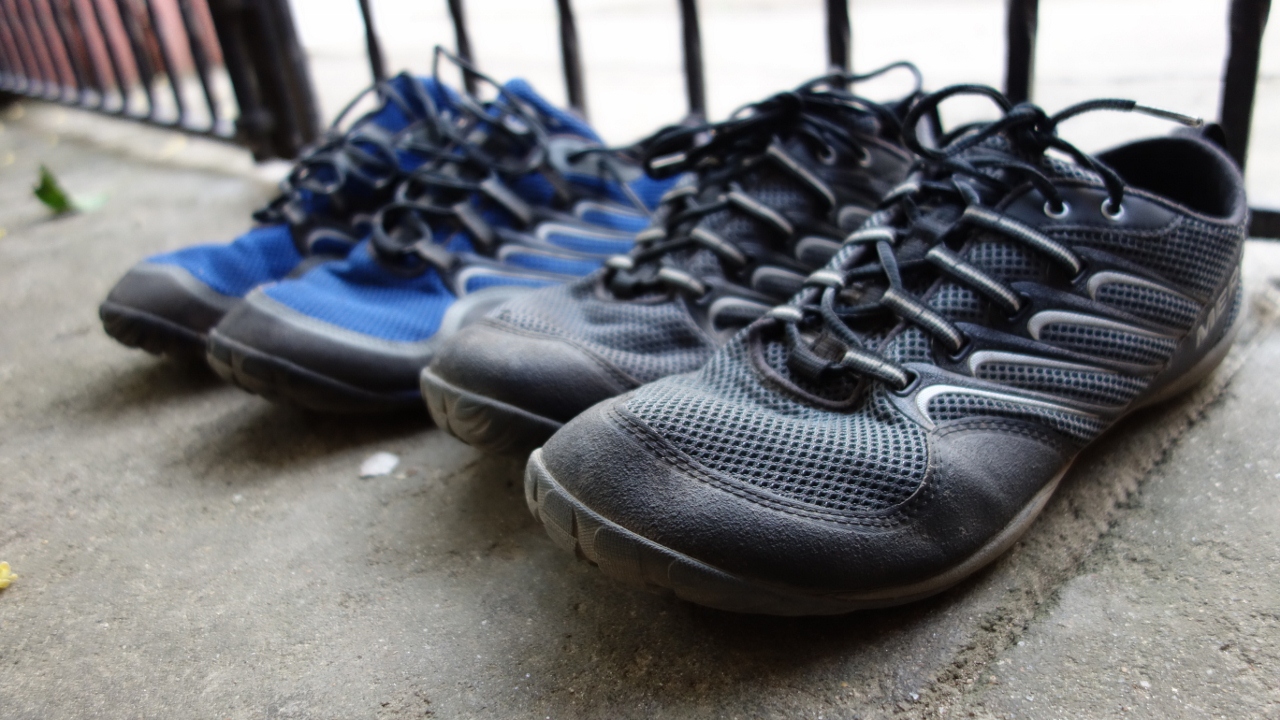 Now, you may have noticed that said packing lists do not include tennis shoes. That’s right: Vince and I are both going to be playing in our Merrell Trailgloves throughout the trip. I met an Australian girl last week who called them “reef boots”, by which I think she meant water socks. They are not your standard court shoe. We’ll have to see how well this works out. Tennis is definitely one sport that has not succumbed to the recent “less is more” trend in footwear. So maybe we’ll be pioneers, forging a whole new type of footwork by staying on the balls of our feet. Or maybe we’ll roll an ankle in the first set. Updates to follow once we actually get a match in.

How often will we play? As much as we can. There aren’t a lot of public tennis courts in India—the predominate public sporting scene centers around pickup cricket played in dust lots—but a lot of the places we’ll be going have tourist resorts. Vince emailed a few resorts w/courts before we left, and it sounds like most of them will let us play for a nominal fee. One even told us that we’ll be supplied a free ball-boy.

And when we’re not able to play, we’ll be running. I’ve hated running, historically, but it’s one of the few readily-available exercise options for travelers. And it’s a great way to explore. Go for even just a 20 min run and you’ll stumble into parts of a new city that you never would’ve otherwise seen. This merits its own post down the line.

One final note: A fringe boon of carrying a heavier racket is that it could, in a pinch, double as a defensive weapon. As a reasonably self-defense-minded person, this is one of the few things that I really hate about traveling long-term—restricted as I am to carry-on baggage, I can’t even carry a decent knife from place to place[4]. As long-term travelers, we’ll all be mugged eventually. Not a huge deal. But is your mugger getting just a bit too muggy for your liking? A well-constructed 12oz racket to the head could probably accomplish something. The downside here is that you might pop the strings, but I’m actually kind of looking forward to finding how just how cheaply one can get a racket strung in this part of the world.

[1] Not at all true; we have no readership.
[2] Though it’s of course offset by how flat and light a racket is. In fact, as I write this my racket is tucked comfortably next to me along the wall of my Mumbai-bound sleeper bus bunk.
[3] The pros still mostly know what’s up.
[4] To say nothing of the legal hair of trying to carry a pistol in a foreign country (don’t worry Mom; I haven’t tried).